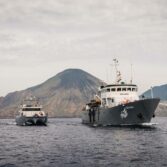 Actively contributing to the protection of the planet upon which we are guests is among the founding principles of our business model. Our daily work doesn’t only oblige us to come up with nontoxic products which are safe for the environment, but also to develop practical support actions for non-profit organisations who pursue objectives in line with the United Nations’ Sustainable Development Goals. Among the most recent and important campaigns launched is Sea Shepherd, an international NPO politically active since 1977 in the protection of ocean ecosystems all over the world.

Who are Sea Shepherd

Compared with images of uncontaminated beaches and clean waters, the seas all over the world are full of damaging plastic and often criminal activity. The number of marine species at risk because of human activity and the pollution of the oceans is dramatic: animals killed by illegal fishing nets, massacred by humans or simply by people passing by.

Even the most mundane human activity has the capability to put entire ecosystems, as complex as they are delicate, in danger or even destroy them.

To face this unacceptable indifference, Sea Shepherd has been active since 1977 with projects dedicated to the protection of marine habitats. They tirelessly carry out intense activities of investigation, documentation, and denunciation of the criminals and the abuse which is carried out on the high seas.

Founded in Vancouver (Canada) by Captain Paul Watson, current president, the NPO today has chapters in 20 countries all over the world – among them Italy – which cooperate to carry out direct action campaigns for the protection of marine ecosystems.

Sea Shepherd Italy has important active campaigns such as Operation SISO, hatched to combat illegal FADs which, in the Aeolian Archipelago alone, cause the deaths of hundreds of loggerhead turtles each year, a species already at risk of extinction. Another important operation is Operation Syracuse, which has the objective of preserving the ecosystem of the Plemmirio Protected Marine Area, where numerous species threatened by poachers live.

On the occasion of Black Friday 2021, last November, we decided to give life to something new: from the 22nd of November to the 3rd of December, we committed ourselves to donate to Sea Shepherd a figure equivalent to what our users have saved (20% of the cost of the product). Our promise has meant that many have examined in depth the risk connected to excessive consumerism and has contributed to empowering our principles of an ethical and sustainable economy.

The damage that Black Friday has caused in the world – and causes every year – is consistent. It is generated by the peak in demand on the consumers’ part, which leads to an intensification in the already unsustainable production of goods. Irresponsible production brings down our Planet.

The flare-up in consumption of mineral and water resources, the toxic substances released following the raw materials manufacturing processes, the packaging waste and the carbon dioxide emissions from shipping and delivery, further exacerbates the environmental impact on our communities.

Therefore, Black Friday has an enormous cost from an environmental point of view, which in a territory like Great Britain alone produces 429,000 tonnes of CO2 emissions, the equivalent of 435 return trips between London and New York.

To oppose the trend of irresponsible consumerism, we have looked for a solution that could assure the right savings for our customers, who have been able to purchase products at a discounted price, and at the same time limit the damages of Black Friday through practical support for real projects.

To continue to support non-profit associations actively involved in the protection of the environment, to pursue a different idea of business compared to the past, which could complement the efforts made to offer quality products and concrete actions to our users to contribute to environmental protection.

To spread, by example, the culture of an ethical and sustainable economy, which is focused on the future, is among the founding principles of our daily work and a source of pride. We hope it will be a source of inspiration for the new generations of entrepreneurs and consumers.