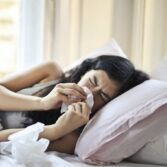 Dust mites are very common parasites, which can trigger considerable irritation, such as allergic reactions and dermatitis. It is essential to learn about them to be able to adequately deal with them. What are dust mites? What do they look like and where do they nest? Let’s start in order and deal with each of these points.

So what are dust mites?

Dust mites are tiny insects, microscopic arthropods. They move through the air to enter homes and hot and humid environments, and then nestle in carpets, curtains, clothes and mattresses.

Whereas normally they are quite harmless, they cause considerable inconvenience and problems for people who are allergic to their faecal particles. It is estimated that about half of the Italian population is affected by their presence, capable of triggering respiratory disorders and allergic reactions.

Dust mites are very small, i.e. about 0.3 millimetres: they have the shape of tiny spiders, impossible to observe and analyse with the naked eye. This makes them even more “insidious”, because they are not easy to spot and eliminate.

The mites’ life cycle can reach up to 4 months in favourable conditions. It usually takes 2-3 weeks from when the eggs hatch until they reach adulthood. At that point, they can lay up to 50 eggs and reproduce easily.

To grow and multiply, mites feed on human or animal organic material found in dust, such as nails, dandruff and skin. 1,000 different specimens can be found in just one gram of dust! So let’s see where they tend to hide more easily.

Where are dust mites found?

Mites are one of the oldest living species ever and, perhaps for this reason, they are very capable of adapting to any climatic condition and place. Traces of them are found, in fact, in all continents – except Antarctica – and especially in humid environments.

So where do the mites nest inside the houses? Usually mainly in fabrics and plants, where they manage to fill up on dust and organic material.

There is no real temperature capable of knocking them out, although it is thought that below 16 °C their lifespan is reduced by 75%. However, lowering the temperature in the home is not the solution: instead, it is good to pay attention above all to the bedrooms. Being dermatophagous – i.e., “skin eaters” – they tend to be found in mattresses and under the bed. This is why it is advisable to frequently lift it up and clean the floor below.

There are also modern solutions to limit their presence, such as anti-mite and breathable mattresses, particularly suitable for those suffering from actual allergies to mites.

The effects of the presence of mites on humans

Dust mite allergy is a very common condition, which causes rhinitis, conjunctivitis, asthma and dermatitis. There are mainly two allergens at the origin of all the symptoms:

To avoid encountering this irritating allergy, prevention is important: do you know AcarZero™? This is an innovative ultrasonic device which eliminates dust mites. The product’s technology is based on the power of ultrasound, capable of remediating environments without any side effects. A non-toxic and environmentally-friendly l solution to say goodbye to allergies generated by the most common species of mites (Dermatophagoides pteronyssinus and Dermatophagoides farinae) and rediscover the pleasure of enjoying every corner of your home to the fullest.