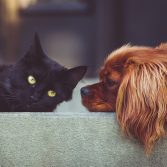 Summer is here, the time of year where the days are longer, it’s hot outside and the windows are thrown open; school finishes for the summer, the holidays are upon us and you want to spend time outdoors with friends. But with the summer heat, another menace arrives: mosquitoes.

Admit it, we always feel plagued by these insects. But did you know that mosquitoes are not just a pest for people, but also for our four-legged friends, be they dogs or cats?

Dogs and cats also get bitten by mosquitoes

There is no distinction when it comes to talking about mosquito bites: these insects actually feed on blood, or more precisely, certain proteins that are essential for egg production, also feeding on nectar, liquids and sugary substances.

However, we don’t need to guard against all mosquitoes; in fact, only the females can bite, as they are equipped with a mouthpiece that is appropriate for this purpose. So begins the hunt for sources of blood: because the female mosquito has a “radar” that allows it to track sources of carbon dioxide (common to all mammals, including pets).

It is not uncommon to find mosquito bites on cats and dogs, as well as on ourselves.

Are mosquitoes dangerous to cats and dogs?

Mosquito SOS: be concerned (and annoyed), but in moderation. In the majority of cases, mosquitoes do not pose a risk to dogs and cats, just as with people. However, even pets have to deal with redness, localised swelling and itchiness.

Then there are cases where mosquitoes can be carriers of dangerous, indeed fatal, illnesses like heartworm disease. So prevention is best.

Heartworm: the disease transmitted to dogs and cats by mosquitoes

The greatest risk to our pets is heartworm. This is a disease passed on by mosquitoes and, specifically, by the feared tiger mosquito which transmits the parasite (larva) by biting dogs and cats, with cardiopulmonary (Dirofilaria immitis) or cutaneous (Dirofilaria repens) consequences. Heartworm reaches the heart and pulmonary artery in cats and dogs through the cardiac cycle, where it starts to proliferate (up to even 30 cm in length).

How does heartworm manifest in dogs? Initially, it is often asymptomatic, it then manifests with cardiac and respiratory problems and, if severe, death. Cats, first believed to be immune, can also be infected with heartworm, but seem less sensitive and, therefore, less at risk of complications.

The importance of prevention and protection

There is no excuse: the correct thing to do is not to run for cover, but to prevent dogs and cats (and people) from getting bitten by mosquitoes. Remember, a dog or a cat that has been bitten by a mosquito could also have an allergic reaction (to be treated according to the vets instructions).

What can you do? In addition to contacting your vet to select the most effective anti-mosquito treatment for your pet, here are some tips and tricks to minimise the presence of mosquitoes in your home.

For example, you can avoid the proliferation of insects by removing any stagnant water from containers and saucers (which are an ideal location for mosquito larvae) or by installing mosquito nets.

But not just that: there are other ways to defend against mosquito bites, for example dedicated ULTRASOUNDtech™ mosquito products, such as ZeroZzz™AMBIENT and ZeroZzz™AIR.

Devices that emit acoustic waves that can disturb female mosquitoes, creating an inhospitable environment for insects, thereby forcing them to go elsewhere.

Are acoustic waves damaging to pets?

Absolutely not. These devices are harmless to pets and to people (including those with pacemakers or other life-saving devices).

So why not try them? Wishing you a happy summer, but only if you are in good company!