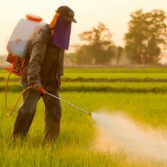 Chemical substances like pesticides played an important role in the history of mankind, allowing, for example, large-scale agricultural development or contributing to beating illnesses like malaria and yellow fever.

However, over time the tendency has been to resort to chemical products even when it wasn’t necessary, transforming normal use into abuse, in particular in the agricultural sector.

Hence, the need to find alternative solutions which could meet the same aims as pesticides without causing the same problems that they at times entail, especially in terms of environmental pollution.

Pesticides: the simplest definition to describe them consists of saying that they are chemical substances deliberately formulated to kill parasites. Pesticides include:

Moreover, in the range of pesticides, there are also products that regulate plant growth, defoliants and desiccants.

Pesticides are used prevalently in agriculture but are also available on the market for private citizens, who can also employ them in houses and gardens.

What are pesticides: a bit of history

Although they are thought to be a relatively recent invention, in reality, pesticides have existed for centuries. Their first use dates back to 2500 B.C., in Ancient Mesopotamia, where sulfur was used as an insecticide.

For the first synthetic products, we had to wait until the 1940s, when DDT was introduced. It was used during the Second World War to cure typhus and malaria and was made available to the public from 1945. In the 1970s, however, glyphosate debuted on the market, the most-used herbicide in the world, which became the active ingredient of many weedkillers, also for domestic use.

The effect of pesticides on the environment

Pesticides are toxic substances deliberately released into the environment, to destroy certain parasites. Their task, however, often is not limited to the achievement of this objective, considering that they involve the entire ecosystem, from water to soil, all the way up to plant and animal species.

In particular, pesticide pollution affects water, from rainwater to lakes, rivers, seas, and stream water. Moreover, traces of these substances are also found in underground water since they are capable of penetrating the soil.

With regards to animal species, the abuse of pesticides, especially on flowering crops, is the main cause of bee die-off: being pollinating insects, they come into direct contact with toxic substances. But that’s not all. Pesticide pollution also affects animals who feed on the food residue which comes from treated plants or who live in contaminated waters. Indirectly, the substances that pesticides are composed of can also harm the birds that feed on insects or worms which have come into contact with these products.

The processes which influence the impact of pesticides on the environment are diverse and include absorption, transfer, distribution, and degradation. Among these, the transfer includes processes that move the pesticide far away from the place where it was applied, and which, in turn, are divided into volatilisation, spray diffusion, run-off – ergo, movement of the product in water on a sloping surface -, cleaning with lye – the substance gets into the water through the soil, in different directions -, absorption and removal from the crops.

The pesticide situation in Italy

Italy, unfortunately, is one of the least virtuous countries, both with regards to the direct use of pesticides – widely used in the agricultural sector – and to the commercial activity linked to these products.

Our country is second only to the United Kingdom in the export of pesticides banned by the EU, which, however, are used on products that are then resold on the European market[1]. A situation generated by a regulatory gap, which – one hopes – the European Union and its member states – Italy included – should work to close as soon as possible.

Alternatives to pesticides: our philosophy

If it’s true that pesticide pollution has an impact that is sometimes directly devastating on the environment, it is also true that, especially in recent times, with a greater understanding of the importance of more sustainable actions, the alternatives to the use of these products have increased.

We at ULTRASOUNDtech firmly believe in the principle that every single individual must not impose upon nature, but integrate into it. For this reason, our company has developed a technology that helps eliminate parasites without harming the environment through the release of chemical substances. It is an important commitment in the direction of a more responsible, respectful, and inclusive business model.