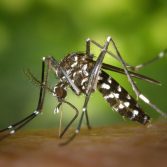 Usually, when we think of mosquitoes, we only remember the annoyance they cause us: like when spending time outdoors, we are disturbed by these insects which, with their stings, cause welts, itching, and redness of the skin.

But that’s not all there is to mosquitoes: here are five interesting facts to better understand these insects, learn about their habits, and perhaps prevent some bites!

1. Who gets bitten by mosquitoes?

Are there any real reasons that lead mosquitoes to choose one “prey” rather than another? To answer that question, scientists and researchers who, through research, have identified some possible deciding factors. Among those are:

2. Why do mosquito bites itch?

Mosquito bites equal itching. This unpleasant sensation, which leads us to scratching, is not so much caused by the sting, but by the saliva of insects. It has an anticoagulant power and causes the release of histamine, an inflammatory agent that generates an allergic reaction (which varies in severity depending on the subject ), resulting in redness, itching and swelling.

This explains why mosquito bites itch.

3. What are mosquitoes useful for?

But what are mosquitoes useful for in nature? The answer is interesting and could lead us to respect these insects that are important in the environmental ecosystem (like every living being on earth, after all) more.

In fact, mosquitoes play a key role in the pollination process. These insects usually feed on nectar and are, therefore, real pollinators (for some plants in particular, such as orchids of the Platanthera species and for cocoa plantations).

But that’s not all: their larvae represent food for small freshwater fish, amphibians, and migratory birds.

4. What do mosquitoes eat?

Let’s start immediately by saying that mosquitoes feed on pollen and vegetable sap (sugary liquids): female mosquitoes seek blood only when they need to take essential substances for the development of eggs.

Therefore, mosquitoes are not always here to harm!

5. What types of mosquitoes exist in Italy?

There are about 60 types of mosquitoes in Italy (and 3,000 existing all over the world).

There are three main species/families: the Aedes, the Anopheles and the Culex. The latter, recognizable by their brown color, are the most common in cities and in the countryside.

Finally, the Aedes mosquitoes include the tiger mosquitoes (Aedes albopictus), easily recognizable by their black and white striped color.

Our innovative device works with acoustic waves, acting specifically against female mosquitoes which, as we have seen, are the only ones responsible for the annoying bites.

ZeroZzz™ technology is based on the mechanical reproduction of the sound produced by the male of the species which, transmitted through special emitters, represents an absolutely natural (non-toxic) remedy to keep the mosquitoes responsible for the bites away.